Could this be WHY Hispanics and Blacks have Highest Unemployment Rates 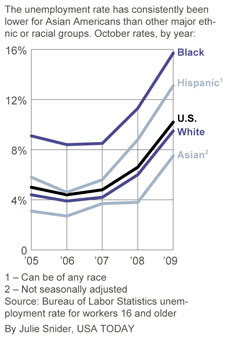 A recent USA Today story highlighted that Asian Americans were the least affected by the current economic situation. They went on to say that it was due partly because of Asians taking care of their own.

We took a quick unscientific survey and found that the Hispanic and Black communities tended to not take care of their own and were more likely to scrutinize their own. Their scrutiny was worst amongst their own and quite less towards other ethnic groups.

So it appears that the economic struggles found in the Hispanic and Black communities are increasing partially due to the lack of confidence in their own people.