Hispanic Marketing: Use Their Flags Wisely 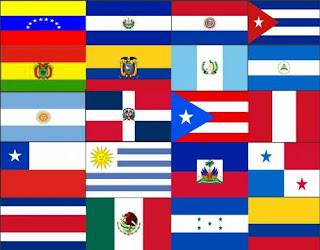 Yes there is etiquette as to the order flags are hoisted and flown on a flag pole. Take for instance the United Nations. In an effort to be respectful to all nations, they have all the flags at the same height and in alphabetical order. The Olympic opening and closing ceremony is handled the same way. This is important but respect for a Hispanic country's flag goes well beyond just the display.

There have been many cases of flag burnings and flag stomping in a show of disapproval with a country. But be careful when you use the flag to show anything but respect for a Hispanic country. In some Hispanic countries the flag can not be used to protest the government. This is NOT ONLY the case in communist countries like Cuba but all throughout Latin America.

So use the flag wisely. Don't always use it as a major attention getter. The only attention you should try to evoke is national pride. If you are marketing using a flag, that flag can also hurt. Just as there is love for the flag in a home country, there may be some dislike and hatred by a neighboring country. Do your research and understand who will be attracted and who will be alienated by the use of a Hispanic country's flag. Display it properly. Be sure that if any negativity is associated with your product or service and there is a Hispanic country flag "attached", there will be quick resentment headed your way. Be careful to not put the flag on garments in a potentially disrespectful location ie the groin, the butt, etc. A safer approach may be to use the flag colors and not the flag. Like using the colors of the Mexican flag in text. The consumer will make the connection with your subtle use of the colors. If you are going to use the flag, be careful! Remember the only emotion you want to evoke is national pride--not hatred, not resentment and especially not disrespect.

This is part of a series of posts on Marketing to Hispanics so come back soon or subscribe.