My Day at the Michael Jackson Memorial Ceremony July 7 2009 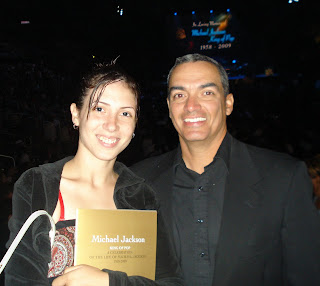 Los Angeles California--On July 7 2009, my daughter and I had the honor and privilege to attend the Memorial Service for Michael Jackson. It was an interestingly moving experience. I am not going to go over too much of what you saw on TV. I want to share with you what you didn't see or feel if you were not there.
We arrived at 8:30 AM for the 10 AM service. The LA Police had created a 5 block perimeter of limited access around the Staples Center (a sports complex in LA where Michael Jackson was rehearsing for his come back). It was not as chaotic as I thought it was going to be. The Los Angeles Police Department did an excellent job of maintaining control and preventing the scene from becoming a circus or riot. As we walked from the car to the arena, we went past dozens of street vendors selling all kinds of Michael Jackson souvenirs. They had posters, portraits, books, CDs, t-shirts, sparkling gloves, black hats, vintage red leather jacket with the zippers, and many more. If you could image something associated with Michael, it was out there for sale.
We entered the Staples Center at about 9AM. We were pleasantly surprised and excited that we had great seats. We were 11 rows up from the main seating area for all the celebrities and honored guests. For the hour before the ceremony started, we just watched star after star arrive and walk by us about 20 feet away. I noticed that there was a ritual amongst the celebrity community that requires that they enter almost on cue without the distraction of another celebrity entering the area at the same time. Then they have to look for people they have to mingle with. It was like a party where everyone knew each other.
As the hour approached 10AM an announcement was made to take your seats as the service was about to begin. Everyone seemed to comply with eager anxiety about what they were about to witness. At exactly 10AM the announcer introduced Smokey Robinson. Smokey read several letters from individuals who could not attend. And after he was done there was a pause of about 20 minutes. For those 20 minutes, it was eerily silent. It was so quiet that you could here the band members talking (and it was NOT through the sound system).
At about 10:20 Michael Jackson arrived. The crowd rose to their feet and applauded like crazy. People were surprised as that was certainly not expected. Then the ceremony resumed. Many of the presenters and singers kept saying that this was a celebration of Michael Jackson's life. Though that may have been their intention, it was very very emotional in that building. Everyone was choked up through out the ceremony. If they weren't, they were passed out.
Each presenter seemed to out do the one before them. Several of the speeches were very memorable for me. Brooke Shields made many people cry. In my immediate vicinity you could hear a lot of people crying with passion. You know how you cried as a little kid where you stopped crying for a second or two to gasp for air. She was very moving. Reverend Al Sharpton was very inspirational. Now I am not a big Rev. Sharpton fan but he was amazing. He uplifted the crowd. Magic Johnson had people laughing with his grilled chicken comments.
After a speech you could tell how moved the crowd was by their lack of reaction. All the presenters received a standing ovation when they were done. But the more moving the commentary the less clapping. As I looked around it was because people couldn't clap as they were wiping tears from their eyes or hugging the person next to them. At one point the crowd started to cheer Michael, Michael, Michael but we just didn't have the energy to sustain it.
Jermaine singing Smile and Michael's daughter Paris' impromptu comments was tough for even the toughest of the toughest to not cry. I don't know how it came across on TV but being there was a powerful experience. I have experienced the death of both of my parents and many friends and family members. The love and closeness that the Jackson family has for each other is powerful. They really love each other. It showed throughout the ceremony.
When the ceremony ended, the Jackson brothers escorted the coffin out of the arena. Then the vacant stage had a microphone with a single spot light on it. The screams of "I love you Michael" came from all directions. The Jackson family pastor, Reverend Lucius Smith, asked us all to join hands in a moment of prayer. His prayer was so appropriate for the moment.
Even in death Michael Jackson can be amazing.
Outside the media was literally hovering to get interviews and fan reaction. I counted 11 helicopters flying above. There were lines of TV broadcast trucks lined up outside of the Staples Center. In the larger plaza outside the Staples Center, all the TV stations had set up their on site studio. They would grab people from the crowd to interview them and try to get an emotional reaction. We spent about an hour outside watching the Jackson family motorcade leave and the news crews try to get a scoop or a sensational story. My daughter and I "worked" our way into the press area and we had the best seat in the house. Both of us were interviewed by various TV stations. My daughter was interviewed by an Australian and Arab TV station. CNN was my moment.
Take a look at some pictures of the day at http://picasaweb.google.com/MarketingExcellenceInc