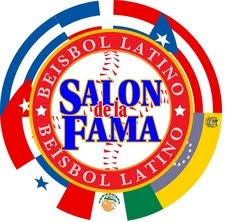 By Alden Gonzalez
NEW YORK -- They called it a "tsunami," this influx of Latin American players that has had such an impact in the Major Leagues over the past couple of decades. And nearly three years ago, some were suggesting that tsunami should be contained.
With that, the Latino Baseball Hall of Fame was formed.
And on Sunday morning at Yankee Stadium, where, a few hours prior, Latin stars like Jorge
Posada, Robinson Cano, Alex Rodriguez and Mariano Rivera were on the field as the Yankees completed an American League Division Series sweep of the Twins, a second class of Latin immortals to be enshrined was announced.
Making up the "Contemporaries" group were pitchers Luis Tiant (born in Cuba), Fernando Valenzuela (Mexico) and Dennis Martinez (Nicaragua), catcher Manny Sanguillen (Panama), designated hitter Edgar Martinez (Puerto Rico), outfielder Rico Carty (Dominican Republic) and first baseman Andres Galarraga (Venezuela).
The "Veterans Committee" honorees were Adolfo Luque (Cuba), Chile Gomez (Mexico), Hector Lopez (Panama), Horacio Martinez (Dominican Republic) and Vidal Lopez (Venezuela).
The Latino Hall of Fame, which has the support of Major League Baseball, also enshrined a promoter, Venezuela's Oscar Negro Prieto, and handed out a couple of awards. Late Yankees owner George Steinbrenner won the Tommy Lasorda Award, given to a non-Latin figure who helps enhance Latin America's presence in the Majors, and Alex Rodriguez, who hit his 600th home run this season, took the LBHF Excellence Award.
"We have something here that is historically very important," LBHP President Roberto Weill said.
The Latino Baseball Hall of Fame was founded, thanks to the joint efforts of Weill, a Cuban-born international entrepreneur, and Rafael Avila, the Dodgers' Latin American scout who founded the first MLB Academy in the Dominican Republic, to honor the best Latinos in baseball and house their evidence and mementos of their accomplishments.
The Hall is headquartered in the Dominican Republic, at the Altos de Chavon at Casa de Campo in La Romana.
"We have so many Latin players [in the Majors] that this makes sense," Yankees executive vice president and chief international officer Felix Lopez said. "Anything we can do to actually make our players feel at home, it's something that just makes sense. And we need to do as much as we can to actually make all our players feel that this is a family environment, that we actually are embracing them."
Last year, the Hall of Fame, which has Lasorda as its director and goodwill ambassador, used five international channels to induct its inaugural class.
Making up the "Cooperstown Historic" group were Roberto Clemente (Puerto Rico), Juan Marichal (Dominican Republic), Luis Aparicio (Venezuela), Rod Carew (Panama), Orlando Cepeda (Puerto Rico), Tony Perez (Cuba), Martin Dihigo (Cuba), Jose de la Caridad Mendez (Cuba), Cristobal Torriente (Cuba), executive Alejandro Pompez (Cuba), journalist Eloy "Buck" Canel (Argentina), broadcaster Jaime Jarrin (Ecuador) and broadcaster Felo Ramirez (Cuba).
From the "Veterans Committee" (for those active before 1959) came Pancho Coimbre (Puerto Rico), Beto Avila (Mexico), Alfonso Carrasquel (Venezuela), Tetelo Vargas (Dominican) and Orestes Minoso (Cuba).
The "Permanent Induction Committee" (active after '59) sent Roberto Alomar (Puerto Rico), Dave Concepcion (Venezuela), Felipe Alou (Dominican), Camilo Pascual (Cuba) and Hector Espino (Mexico) to the Hall.
Now, another class will join them, with the new immortals set to be inducted on Feb. 12.
Based on numbers, the idea to honor Latin American ballplayers was easy, and so was housing the Hall of Fame in the Dominican Republic.
In 2010, 28.3 percent of the players on Opening Day Major League rosters were of Latin American descent, according to the University of Central Florida's Racial and Gender Report Card. That number stood at 13 percent in 1990 and has been on an upward trend ever since.
As for the Dominican Republic, the island nation, which boasts more players in the Majors than other Latin American country, holds 30 Major League training camps and has won a record 18 Caribbean Series trophies.
"Playing against the Dominican Republic," Weill said, "is like playing against the Yankees [for Caribbean teams]."
More information can be found at latinobaseballhall.com.